Untold stories are sadly a fact for many bands who never get to have their music heard but this in one story I am delighted to share with you, enter Kyrie Ellison.

Having formed in the 80’s and disbanding in 1991 after supporting a number of national metal acts, co-founding member Mark G David teamed up with guitar virtuoso Mike Campese in 1999 and continued to perform live . In 2013 the original line up of Mark G David, Chuck Woodward and Paul G Warrior got together for the sole purpose of completing the long overdue Kyrie Ellison album which was recorded in various locations.

Untold Stories: The Scriptures of Sadness was released this year and I have to say boy am I glad these guys finished that album!

From the opening intro you are drawn into the haunting story that is about to unfold. Unborn Soldier opens with a melancholic guitar harmony before launching into a classic metal riff peppered with proggy, almost jazzy off beats on the bass. Cue the distinctive angst ridden vocals of Chad Wagner who pulls you into the dark and frightening world of that poor soldier who ‘prays to God’ that he will win, close your eyes and you are feeling his fears as he battles.

Dimension of Sorrow and Lonely Memories continue to enforce the sadness of the story. Lonely Memories has a good light doomy riff that would certainly be to the taste of many doom fans, especially when it picks up pace further into the track. Foreseen Destiny one of my personal favourites opens with the eerie sound of the wind and acoustic style guitar before launching into a melody and riff that you can’t help but tap your feet to, or in my case bang your head.

I am not sure that the album was written as a concept album but it does seem to follow one man’s journey down a lonely path to reach the New World, the final album track. My only slight criticism is that the production could have been ‘fuller’ but in this instance it suits the style of the artist very well. This is an album that grows on you with each listen and is well worth a space on your shelves. 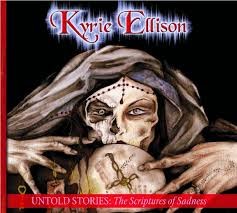