I have had such a blast this year – it has been manic for sure! Grimm Up North was a fabulous festival in aid of Steve Grimmett from Grim Reaper and there were so many bands that played it was really hard to choose my faves! Of course the old skool bands  rocked – Spartan Warrior, Troyen , Desolation Angels and Weapon UK and newly formed bands Like Lovell’s Blade stole the show for sure. I was blown away by Holocaust – my first time seeing them and hope it’s not so long next time! I had a blast DJin between bands and compereing. I have to apologise to Kevin Riddles from Tytan- lol – sorry again- a mis-understanding with a thumbs up! Grimm Up North is back next year – watch this space!

I am having such fun this year with so many great gigs coming up and looking forward to my fave festival Bloodstock, catching up with my girls and who knows a DJ set would be nice! I am DJin live @ Grimm Up North Fest on 30th Sep 2017- it’s a great benefit gig for Steve Grimmet of Grim Reaper who you all know lost his leg whilst on tour ! Get your tickets and grab a beer with me!

I will also be live @ The Carlisle in Hastings loads this year as I am resident DJ , booker and promoter here! We have a pre- warm up gig for  the WASP gig that will take place at The White Rock Theatre in Hastings, add to that  Fri 17th Nov when I will be back again in support of the Chris Holmes/ Sacrilege gig at the Carlisle.

I have been offered other live dates and must apologise to those that I had to turn down- maybe next year!

I have yet again been banned by FB for using my name of DJ Demonize Debz. (Debz Jane Demonize). Of course all of you know me by this name because this is who I am and after the 5th time of submitting the same ID one would hope that they had a way of marking a profile to say it has been checked given that they are such a large organisation! Who knows maybe it is too simple **chuckles to oneself**!

Anyway I hope you are having a rocking 2017 so far and I will see you on the road somewhere!

I am delighted to announce that I will be DJin between bands at HRH NWOBHM that takes place in Sheffield on 2nd and 3rd Dec at the O2 Academy. Check out the first class line up and also check out all of the other great festivals Hard Rock Hell do by joining the HRH United page on Facebook . 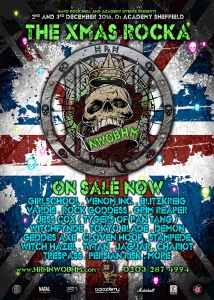 I adore DJing live and travelling to new places. This year I have already DJ’ed @ Garage Dayz Re-Visited in London and next stop is Mammothfest where I will be DJin @ The Concorde 2 in Brighton on Sat 1st October. Then a short break before DJin @ A Day of Rock 2016 on the 12th of September in Kettering with DJ Legless and the mighty Onslaught headlining. I have another date in December to announce so watch this space! If you need a DJ for festival or a gig, ask me and I will be happy to do it if I am free!

I decided to go to Bloodstock a couple of weeks before it happened as I was lucky enough to get someone to cover my post at The Carlisle and I also bid on an auction to win tickets and a signed cymbal from Mastodon – and guess what I won it!

So my Metal Devastation sidekick and I set off to spread the MDR word and basically have a great time!

Day one, Thurs: After six-hour journey and an hour queuing to collect our guest passes we finally pitched our tents and decided to have our first drink of the day – we forgot we hadn’t eaten and didn’t think about those triple vodkas taking effect! But hey it was Bloodstock. After a quick change and brush up off we went to meet up with our Bloodstock family. Walking though the VIP campsite it was great to see so many old faces that we knew, it had been a while ……! It was our very intention to go and see a couple of bands but we ended up staying in the VIP bar listening to great sounds from The Vicious Breed DJ’s and of course drinking loads of vodka and sampling some of the many ales that the VIP bar sold! Needless to say I got absolutely hammered before weaving my way back to my tent, a ¼ of a mile walk that dues to my zig zags must have been extended to at least ½ a mile (chuckles at the memory)!

Once I finally had a steady belly on Friday I ventured to the main arena to see what bands were playing and to visit the art gallery that was showing a selection of Paul Gregory’s work. It was absolutely amazing to see such beautiful paintings at Bloodstock Open Air and I hadn’t realised how great an artist he actually was!

It was hard to choose who to watch and on a couple of occasions I missed beginnings and ends of bands so I didn’t miss the whole sets  but I did watch: Beholder, Beyond The Black, Evil Scarecrow, Venom , Behemoth and Twisted Sister . Evil Scarecrow were fabulous. They had the crowd in the palm of their hands and watching the whole crowd shuffle from side to side to Crabulon was most definitely an experience, and what a crowd for an early gig. Beholder surprised me with the songs from their new album Reflections that is far removed from their previous releases but a bloody good listen. Twisted Sister – what can I say? It was great to see them back and Dee Snider, as always commanded your attention and the band were an absolute delight to watch. Many tears were shed by fans that night as it was their last gig and I am just happy I got to see it! Day done – off to bed!

On Saturday morning we were told to meet at the backstage area at 11am to collect the cymbal we had won from Mastodon but we finally received it at 3.30pm. That was an experience, being backstage with Fear Factory, Mastodon and more. Having stayed sober all day again it was time to have a nice cool vodka in the sweltering heat and get ready to see some more great bands. We saw The Raven Age, Vicious Nature, Kill II This, Vallenfyre, Fear Factory, Paradise Lost and Gojira. Vicious Nature killed the Jägermeister stage. Frontman Andy Pyke led the watchers into a fists in the air frenzy and after a short time had everybody singing along. It was a short set but straight to the point and I would like to see them promoted to the Sophie Stage. It was the first time I had seen Vallenfyre and Gojira live. I liked the dark doomy tones of Vallenfyre and the dark sense of humour of front man Gregor Mackintosh when he told people to start the slowest pit ever, it did make me chuckle. Gojira picked up the arena, chewed it up and spat it back out to smother us in their utterly brilliant tunes and for me they were the best band of the day and quite possibly the weekend! After a few mores beers we headed back for an early night ready for Sunday!

As I hadn’t drunk the 2 litres of vodka I had taken with me so I decided that Sunday would be the day to drink them with my friends, only to find them hung over and booze battered from the night before, so I gave it away! On Sunday I watched, Whispered, Pythia, Metal Allegiance, Dragonforce, Symphony X, Anthrax and Slayer. Whispered were real surprise for me and I will be checking them out further. Described as Samurai metal I can see why. Apart for the obvious Japanese dress the blending of metal and Japanese music works really well . Metal Allegiance were fantastic but I am biased as I am a fan of Death Angel and Testament. Their cover of Bowie’s Suffragette City has the whole crowd singing along and it was a real treat  watching Alex Skolnick’s masterful guitar playing. Anthrax for me were at their best and Joey Belladonna’s vocals were faultless. Their set list perfectly chosen to please fans old and new. It really was a pleasure to watch them. Finally, Slayer- the stage set was eye-catching with crosses and flames and Tom Araya was in a  great mood, even cracking a few jokes. I did think Slayer were better than when I had last seen them a number of years ago but I wasn’t over excited by their set.

So BOA 2016 is over. It is still, in my opinion the best metal festival in the UK and I don’t see any reason why that will change. I make a massive note to myself for 2017 – no drinking on the first day! Keep it metal all – see you next year /m/